The trouble with using all this gear is that it takes up a lot of space that blocks the view for others. Visitors to the beach have to find a way around Jason’s set. God help anyone who gets too close or who walk across his captured field of view. As long as Jason is there with all his gear, he owns the beach to the exclusion of everyone else who wants to pause and get a photo. The regulations are there to protect the site for all visitors. Though Jason claims he is not demanding special privileges for photographers, he is. He wants what any vandal wants: special treatment because he is an artist. This makes him little different from tagger Andre Saraiva who scored a boulder in Joshua Tree National Park with his “artistic” OX brand. To hell with the rest of the people who come to Golden Gate NRA. Jason wants to get his shot*.

Jason is related to another creature I have seen in the national park. You find these at scenic viewpoints. They arrive at the most crowded and photogenic hours, then go beyond the fence and get up close with the landscape for lengthy periods of time. That their activities ruin the photos of other visitors does not seem to matter to them: the photo that no one else is taking is what matters. I once waited at Grand Teton’s Chapel of the Transfiguration while a woman waddled around for several minutes photographing the building from every possible angle she could think of while other visitors waited for her to move. When she disappeared behind a corner, I thought I had my chance, but her timing was impeccable: she emerged just as I clicked the shutter, which was particularly irksome because I was using expensive instant film.

On another occasion, I was made to stand for several minutes while an Belgian photographer hogged a precious view of Yellowstone’s Upper Falls. He took photo after photo with camera after camera, checking angle after angle while the light faded, oblivious to my telling sighs. When he finally realized I was there, he slunk off, never uttering a word of apology.

It is right that we rebel against such selfishness. While I — like many other photographers — value a unique image, I also remember that I share the park with others who also want to get a picture. So I ask people to think beyond themselves, be aware of where they are standing in relation to other photographers, do their business quickly when there are crowds, and stay out of images of others. Art isn’t rude: it tells truths. Sometimes, though, the truth they tell is less flattering to the artist than he would think, particularly when there are onlookers to capture her/his oafishness: 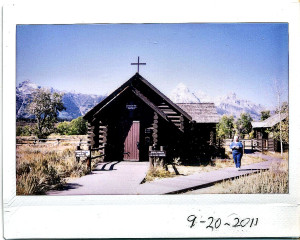 *I have often said that the measure of a photographer is not his equipment — as the gearheads would have you believe — but how s/he uses it. I know fine photographers who work with toy cameras and I know hacks who have the finest equipment.

One thought on “Rude Photographers in the Parks”