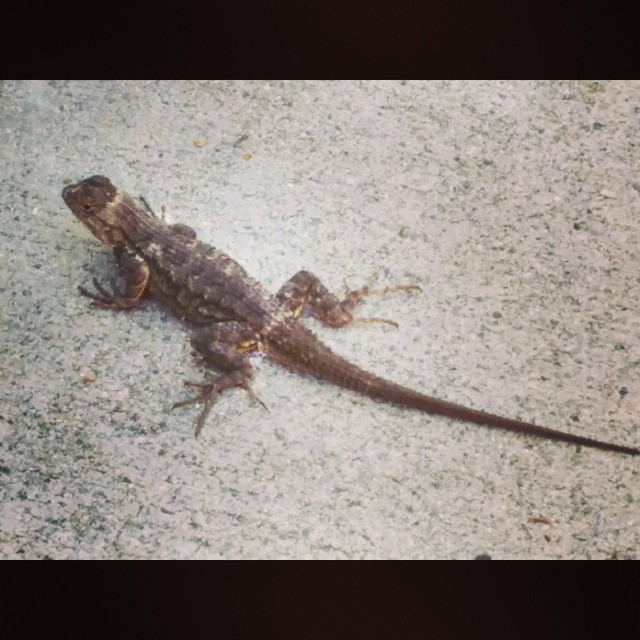 Fence lizards are a frequent sight along chaparral trails, scurrying from sight or doing pushups. I count at least one each time I go out and hear more than that scurrying through the leaf litter and the grass. Sceloporus occidentalis longipes or the Great Basin Fence Lizard is the subspecies most commonly seen in Southern California. They are recognizable by the white tire tread markings down their tan to dark gray backs and, of course, the twin hemispheres of turquoise and azure on their stomachs. You find Western Fence Lizards at all elevations. I have one living beneath my deck which lets me get a good look at it before running into the thornwood. The neighborhood children know it as my lizard and have been warned against pestering it.

There’s another good reason for leaving the lizards alone. The black legged tick — the principle vector of Lyme Disease in the west — favor the reptiles as a host. A 2011 press release from UC Berkeley noted:

In 1998, a pioneering study led by UC Berkeley entomologist Robert Lane found that a protein in the Western fence lizard’s blood killed Borrelia bacteria, and as a result, Lyme-infected ticks that feed on the lizard’s blood are cleansed of the disease-causing pathogen. Moreover, research has found that up to 90 percent of the juvenile ticks in this species feed on the Western fence lizard, which is prevalent throughout California and neighboring states.

Scientists decided to test to see what would happen if they removed the lizards from plots where they picked up the ticks. They expected that the numbers of Lyme Disease-carrying ticks would increase in other populations. But the actual result was surprising: when the lizards were removed, scientists found 95% fewer black-legged ticks overall! Juvenile ticks need the lizards as an early host it appears.

Nonetheless, herpetologists do not call for the slaughter of the lizards. The native vaccine is effective in reducing the incidence of Lyme Disease in adult ticks. Los Angeles Times writer Karin Klein posited that annihilating the lizards would lead the black legged ticks to switch to different blood donors such as wood rats which do not have the anti-biotic protein in their blood. We would see our biome’s immunity to the spread of Lyme Disease disappear. Instead of a very few cases each year, we Californians would be seeing victims in the hundreds. The wilderness would become a much more dangerous place than it is now.

Beyond mere sentimentality, there is a strong case for leaving the Western Fence Lizard alone to do its pushups in the sun. There is little Lyme Disease in California. The lizards deserve to live.