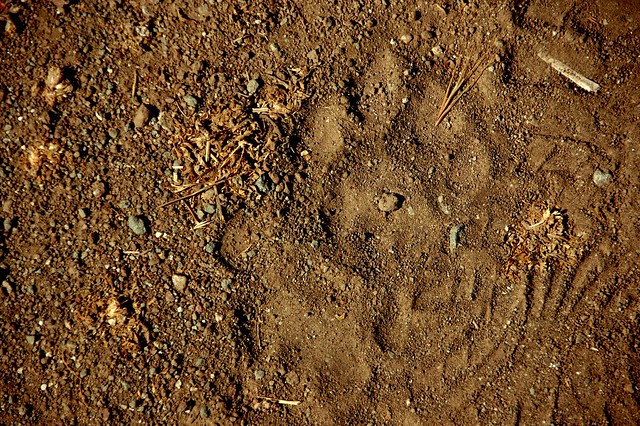 The last mountain lion — a youngster — perished after Fish and Game hunters decided to shoot him after he crouched at the sight of a woman and the toddlers she had with her. No one knows what possessed the mother to bring her children into an area which had been clearly signed as to the presence of a big cat. The lion had to die. No one rebuked the woman for her arrant stupidity at putting her little ones at risk except in the comments section of the Lake Forest Patch.

The Crouching Cougar was one of several who have prowled the park, mostly without incident. I had my second sighting in the wild here. The first was in Yellowstone National Park’s Hayden Valley. My father was doing his usual driving-in-a-rush-past-the-sights-because-miles-matter-more-than-memories that he did when we went on a road trip. The lion was prowling along the edge of a forest near the Mud Volcano. Look! I cried, but my father didn’t want to waste the time and my mother was afraid that I would do something stupid like run up to pet it. Other tourists watched as it stalked towards the river. In an instant it disappeared behind us. We lost a precious experience.

The second time I saw a puma I was walking on the Edison Road — the same place where I have seen tracks many times. Most people who photograph a mountain lion get a lovely picture of the beast’s tail as it flees. The view I had was straight on. As I approached a copse of toyon, the puma jumped out into the road, took a quick look, turned and ran around the bend of the road, out of sight. I stopped for a long second, laughed nervously, and said “Well, I see you aren’t taking appointments.” Then I backed out step by slow step until I felt sure that the lion hadn’t followed me or circled around. My wife thinks that the beast saw my size — I am six foot, six and a half inches tall — and the big stick I was carrying. I don’t read minds, especially not those of wild animals. What I did next was call the rangers and left them a message. The next day they went to look and found the tracks where I’d said they’d be.

Whiting has a checkered history of human interaction with Felis concolor. An incident that happened shortly afterwards stands out in my original blog:

I came upon a park ranger who was deciding what to do with a dead rabbit. It had clearly been killed and chewed. Most of its right haunch and the cheek had been eaten away. She decided to move it into the bushes so that whoever we had disturbed in the devouring of this Western Cottontail could come back and finish the feast.

Two months after my Edison Road encounter, the same lion slew and ate a biker. I remember the night well. From my other blog:

Rangers and wardens were posted at the entrances to Whiting Ranch Wilderness, keeping hikers and bikers out of the zig-zag ridge country while trackers scoured the area to be sure that they’d killed the perpetrator of yesterdays attacks. I stopped to talk to Rangers Cathy and Laurie who were posted at the gate next to Concourse Park. Cathy told me that flowers have been left at the Borrego Creek entrance to the wilderness area. From our conversation, I was able to reconstruct what probably happened.

The biker had stopped along side the Cactus Trail which runs through the northeast corner of the park. I’ve often seen lion tracks while hiking along this and the North Pond Trail which parallels it: they come for the water. Another biker reported that he’d seen the fellow trying to fix his bike along a woody section. He offered to help, but the guy said he had the situation under control. The other biker went on…

What trackers found at the scene of the first kill was the body and the bike. The bike was standing on its kick stand with a broken chain. The vegetation around the kill was relatively undisturbed. What seems to have happened was that the lion sneaked up on the fellow while he was trying to fix his bike.

The other victim bumbled into the area following the attack while in the company of another biker. In this second case, the lion appears to have been defending its kill. I asked the ranger about her status: she sustained injuries to her scalp, her neck, and her face. She will require plastic surgery. The friend who beat off the attack was not physically injured. More than a few people have said that the friend is the kind of person that they would like to have hiking or biking with them.

The winter night was dark. We could see the bright lights where the rescue crew was mopping up. Earlier I had heard the helicopter coming in to fetch the woman. Hunters tracked the lion and shot it. Rangers closed the park until lab tests confirmed that they had the right predator.

A mother and her cubs followed the infamous man eater. They bothered no one. I remember seeing the tracks — side by side — as I walked the Line Shack late one afternoon. A security guard at Saddleback Church kept running into the female on his midnight rounds. He dutifully reported the encounters. His boss wondered if he had been seeing things until a video camera caught her drinking out of a fountain.

Most of my neighbors didn’t worry about mountain lions in the neighborhood. One morning I found a track in the mud next to the complex’s fountain. I mentioned it to a neighbor who lived next to the water work a few weeks later. She told me that her Labrador Retriever went crazy and whimpered to be let inside the condo. “I don’t mind them,” she said. “They were here first. We’re only visitors.”

The 2008 Santiago Fire became the biggest environmental news for a few years in Whiting. The blaze burned across the park, stripping the hills of the chaparral and sage scrub. Orange County fire fighters kept the conflagration out of our houses. The park remained closed and no one worried about lions for more than two years. I got a dog of my own and we walked in the Cleveland National Forest. There were never any mountain lion or deer tracks on the Harding Trail.

The next Whiting lion incident had a comical twist. A youngster took to running with mountain bikers as they zoomed down the Serrano Cow Trail or jumping across their path. A photographer caught a coyote barking at the lion. The Youtube video describes itself as “Coyote Drives Off Mountain Lion“. (“Mountain Lion ignores Coyote” sums up the clip better.) Then the rangers and Fish and Game had too much of the predator’s antics. They trapped it and sent it to a zoo. I imagine Fish and Game saying “So, you want to be around humans. We’ll send you to a place where you can see lots of humans.”

We still talk about whether the last lion needed to die. Fish and Game hunters made the call, citing the distinction that the lion crouched instead of running away. An Arizona professor who studied the mountain lions of the Santa Ana mountains told me that people didn’t realize how many times they had been within striking distance of a cougar. Most of the time, nothing happened. I have often reflected on my encounter with the Whiting Man Eater. The whole event was over in seconds. I remember him crashing out of the toyon, landing on all fours, looking me in the eyes, and then thundering away, his paws thumping as he left my company.

Those beats resound in my head. He was a big boy. Had I been a failed kill?