A wasp laid down its prey — a large brown beetle that was twice its size — and daintily tiptoed along the tops of the dry grass after giving its victim one more sting for good measure. The Hymenopterid climbed the hill looking for the hole it had dug to store its catch. I watched for a few minutes, but the wasp’s search proved to be a long one so I left to get home in time to wash and change for my Friday evening support group. 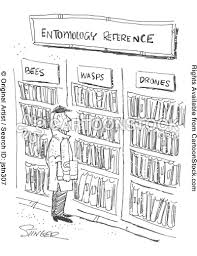 I had enough time to check some guidebooks. The old Peterson Guide was useless. There was nothing that looked like the wasp with the iridescent indigo wings and red legs. A web search turned up Episyryon conterminus posterus — the spider wasp which, as it name suggests, stalks spiders, anesthetizes them, and stores them as larder for its larvae. I regretted not having the time to observe it for longer, but I counted it a coup nonetheless.

What a terrible world insects must live in. Some say that humankind has only one predator and that is other humans, but they are nothing like this. The things that hunt us — I am thinking of the big cats and the great bears — finish their slaughter rapidly. To be caught and then denied death so that your fresh tissues can be sucked from your husk! No, we have no predators like these. Or if we do, they are well hidden from us.