Never underestimate a little dog. Once I saw a small poodle following its master up the trail to Cucamonga Peak in the Cucamonga Wilderness of the Angeles National Forest. The trail was rocky and steep, and we were about two miles up it, but there was the little guy keeping up with his owner who was moving at a steady clip. The only problem that I had was that the dog shouldn’t have been in a federal wilderness area (we had stopped with our Boston Terrier at the boundary). Like many dog owners, his master presumed that his dog was well behaved enough that he could snub the rule. 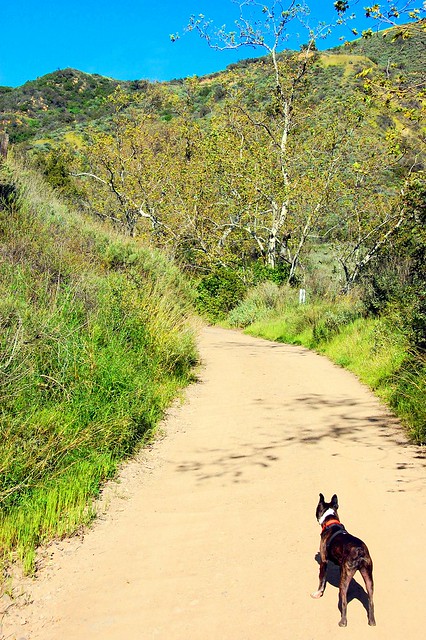 Dogs on a trail are a mixed blessing. Much of this depends on the trail — I used to take Drake, my Boston Terrier, on the steep, winding, but wide Harding Trail in the Cleveland National Forest until the climb grew too steep for him and he was forced to retire. Many people ran their dogs on this track. It was easy to keep Drake on the trail. He often ran ahead of me — Hurry up, Dad! — and enjoyed sniffing the trail’s edges. When we reached Goat Shed Point overlooking Modjeska Canyon, we stopped for dog food and a water break. When we arrived home, he went to his little bed and slept until Mommy came home at around seven in the evening.

Those were good days. I enjoyed his company; and he kept me going. Both of these were positive benefits of having a dog along, but I have seen more than a few cases where dogs create a problem for hikers, horseback riders, and wildlife.

Consider the wildlife. Dogs like to chase squirrels, rabbits, and whatever else they see. Owners find this amusing because their pets seldom catch their prey, but consider these chases from the perspective of, say, the rabbit. There you are foraging when this big monster that looks and smells a lot like a coyote charges you out of nowhere. You abandon your grazing and dash into a thicket. For all you know, this is a predator out to secure its higher place on the food pyramid by eating you. You wait until it passes, losing valuable feeding time as you do. Later you might see it again as it comes back down the trail.

Prey animals are not the only ones threatened by dogs. Most predators define their territories by scent. If you smell that your neighbor has left his mark on a tree, you will avoid that area (unless you are feeling like expanding your own territory). When a dog urinates or leaves its feces, it sends a confusing message to the coyotes, wolves, bobcats, and mountain lions who may be around. They may avoid an area unnecessarily and feel stressed by the odor incursion. Some may rebel and attack the dog, which can also be bad if the owner decides to intervene to save his pet. This boldness may cause the more dangerous and jaded predators such as mountain lions to invade neighborhoods which stink of dog. A normal deterrent thus loses its power.

Another problem has to do with what your dog might pick up. Ticks and fleas, of course, are high on this list. Both carry illnesses such as spotted fever and Lyme Disease in the case of the tick and plague in the case of the flea. Many people forget that there is another hazard that your dog can bring home to you. The area where I live is covered, in places, with large stands of poison oak. Your dog may immerse himself in this. This is not a problem for the dog because he is naturally resistant to the effects of urushiol. The oil sticks to his coat however and when you kneel down to pet him, you get it on your skin. These are the main reasons why I kept Drake to the middle of any trails we walked (he showed little interest in rabbits.)

Dogs can be a threat to other trail users as well. Most people have no idea how their dog will act when they encounter strangers such as other dogs, hikers, trail bikers, and riders on horseback, especially if the dog in question is a recent rescue. Southern Californian users of wilderness trails and dog owners are up in arms about an incident at O’Neill Regional Park a few weeks ago where a woman brought her dog into an area closed to canines. The boxer mix was off leash when a party of horses and their riders approached. It freaked out and attacked the horses and their riders for about eight minutes:

The horses and their riders clearly had the right of way as the Board of Supervisors chairman, Todd Spitzer, noted in a press release, “Dogs need to be walked on a leash and in this case, the dog was on a trail that doesn’t allow dogs. This is a situation where injuries could have been avoided if the owner would have followed the law. We need help from the community in locating the dog and I encourage people to assist in this search so that the County can prevent a dog attack like this from happening again.”

….According to a post on www.imgur.com, one of the riders was badly hurt. “The injured rider has a chest contusion, possible fractured wrist and hip contusion.” Of course, the horses also suffered. “My horse, Tyr, was bitten multiple times. He was brave & fought back throughout the ordeal, which included the dog pursuing (leaping and biting) for 1/4 mile. ” The rider also noted, “Two horses were bitten multiple times and are under veterinary care/on medications.”

The rider further noted that the photo was taken after the attack and after the owner of the dog had given information to the riders. That may have seemed unnecessary, but the woman was not to be trusted, “The owner gave false name/number and fled the park (off-trail) with Rangers in pursuit.” 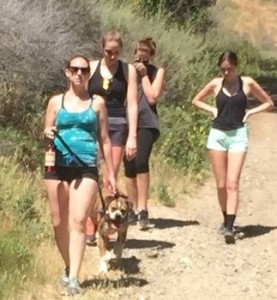 If you know the woman in the photograph, I urge you to call OC Animal Care Operations at 714-796-6460, referencing case A15-008874. The dog and its owners pose a danger to other people. You may request anonymity.

Why does this kind of thing happen? I believe it is probably due to the role a dog plays in our households. Canines are not like the domestic animals we rear for their meat and milk. We see them as family members. We believe that if it is safe and legal for us to enter a wilderness area, our pet can, too. If our dog gets into trouble, we think first of the dog not the injured party. Dysfunctional families defend their bullies. They will lie, they will whine, they will make themselves out as the victims hoping that their displays overwhelm authorities. Victims are best served by not letting up and the rest of us serve us all by intervening on their behalf.

I love my Boston Terrier, so do not confuse this for an anti-canine diatribe. My call is for accountability and responsibility. Follow the rules and know your dog and its tendencies well. A dog’s relationships extend beyond the household, so do not assume that a dog that acts well around your family will behave well among strangers, particularly where there are unusual conditions that the dog has not met before. I will ask owners if it is safe to approach and leash Drake up if I have the slightest doubt about how he will behave. His is my friend and de facto child. What he wreaks, I wreak. I control him because I want to remain on good terms with the world.

3 thoughts on “Dogs on the Trail”