Summer offers mercies to the chaparral hiker. One of these is the change of the colors of poison oak from a glossy green to an autumnal red. Poison oak cannot be called an herb or a shrub or a vine or a tree: it can be any of these. I know of patches where it sprouts as a bush and other places where it throttles a tree. There is a spot in O’Neill Regional Park where it stretches to the forest canopy as a large sapling. If there is shade, there is probably poison oak mixed in the ground cover. And if there is sun, it may well be there, too. The pretty leaves tricked one hiker I know to use them as a wipe. How could anything so beautiful cause suffering? was the reasoning that passed through her head. Toxicodendron diversilobum is a most devious plant, the closest thing I can think of as an argument for intelligent design if not by a benevolent creator, then by a demon.

I have never had the misfortune of falling into an infestation of poison oak as did one urushiol-sensitive hang glider I know, but I got into some poison ivy at Valley Forge when I was eight. My mother embarrassed me with the story up until her death, but over time battlefields melded in her head and she set my debacle at Gettysburg. She meant it both as a badge of honor and a humiliation. I remember how the itching began deep in the skin of my legs and spread, as I scratched, to my arms. The worst part came when we flew back to California. She made me wear my Robert Hall suit — one dressed one’s best when one flew in those days — which caused the itch to intensify as I sweated. I bathed in calamine lotion when I got home until the sores stopped weeping a week or two later.

Urushiol, the active ingredient in the plants of the Toxicodendron genus, attacks the skin as an oil that can get on you by direct contact with the leaves, clothing or towels that have brushed against the plant, or the fur of a friendly dog who made his way to you through a infested tract. (Dogs are immune to the effects, so you won’t have a co-sufferer if you are exposed in this fashion.) Crushed leaves release more of the oil, so just brushing against the plant may only trigger a slight reaction. Just a quarter of a cup of the oil can cause rashes in every person on the planet. The whole herb is saturated with the oil, so if you run through the canes in winter when there are no leaves to identify them by, you can develop the dermatitis from a billionth of a gram clinging to the stalks. The death of the plant does not secure safety because the oil remains potent for five years or more and archaeologists have broken out after handling samples five or more centuries old.

The first and best treatment for exposure to poison oak is to wash the area off completely with strong soap and water. Tecnu has worked well for me: I use it at full strength on myself and in diluted form when I need to clean the dog. Scratching the sores doesn’t cause them to spread once you have removed urushiol, but it can rupture the blisters that form and allow the entrance of an infection. Soaking in cold water, taking over-the-counter corticosteroids, and using various OTC itching preparations including calamine lotion can fend off the itch. The rash should go away on its own in a few weeks. Big guns such as antihistamines and hyrdrocortisone creams are available for the tougher cases.

Nothing works better than not getting into the stuff in the first place. People who come hiking with me learn about the three leaves and summer’s scarlet. I watch to see what is growing along the trails and I keep my dog leashed when we are passing a patch. And if I have the slightest doubt, I take a cold shower when I get home, paying special attention to the places that might have been contaminated. 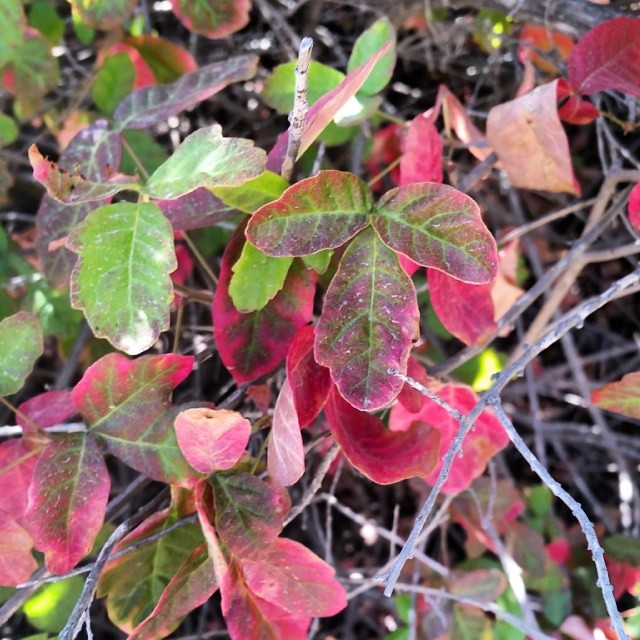