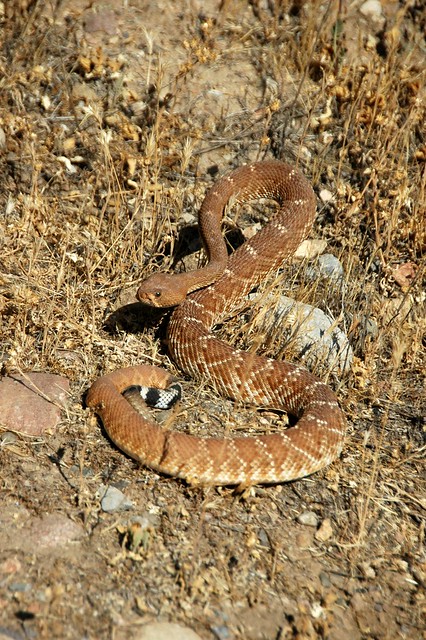 “You know,” I laughed to friends on another day, “I can move pretty fast for an old man.”

Less than an hour later, we saw a second rattler on the Water Tank Road. The tiny, pencil-thin Southern Pacific Rattlesnake was enjoying the shade of that warm February day. “There’s a snake here,” my wife said as she moved to a safe distance. I came up for a closer look and verified that it was a spawn of the previous spring with a single button on its tail. It lay on the trail, absorbing the heat of the springlike day and paying us no heed. I walked around it, getting no closer than five feet, and considered the problem. Mountain bikers would be through here soon. Many didn’t care. One told me once that he had run over a snake, never pausing to see what species it was.

I didn’t want this one to suffer the same fate, so I broke off a long, woody stalk of Saharan mustard and prodded the little viper. The creature liked its spot on the dirt, so it didn’t take kindly to this persuasion. “Silly snake,” Lynn said. “We’re trying to help you.” Sense penetrated its tiny brain, however, and it moved grudgingly into the weeds.

The only other rattler that Lynn saw was in the bucket of an animal control officer who was moving it from the apron of someone’s swimming pool to a large, fenced field along O’Neill’s Live Oak Trail. I saw my fourth dozing on the path just outside of Sleepy Hollow. A few pebbles woke it up and, after a threat display, it slunk into the grass. Ever since I have found myself cautiously slowing down before that spot. I had nearly walked over the sleeper.

There are dark rumors that the Southern Pacific Rattlesnake has interbred with the Mojave Green, a viper of infamous toxicity. I suspect that the rumor started when someone observed the greenish blue underside of a Southern Pacific and assumed an unholy parentage. The Southern Pacific is trouble enough. Though rattlesnake venom is less toxic than that of cobras and other serpents, the Crotalus delivery system makes it more of a threat. Most poisonous snakes and poisonous lizards must grind their venom into the wound. Rattlesnakes inject it through their hollow, needle-like fangs.

Plenty of predators — coyotes, eagles, hawks, owls, and badgers — dine on rattlesnake. Neonates — who lack the sense to protect themselves — are a prey of choice of many birds, raccoons, skunks, and weasels. The creature which inspires the most fear in this fierce snake is the King Snake (in California, Lampropeltis californiae and Lampropeltis zonata), a colorful serpent that favors rattlesnakes as meals:

Rattlesnakes sense kingsnakes’ presence by their odor. When they realize a kingsnake is nearby, they begin enacting a set of defensive postures known as “body bridging”. Unlike its normal erect and coiled defensive-striking posture, the rattlesnake keeps its head low to the ground in an attempt to prevent the kingsnake from gaining a hold of it (the head being the first part of the rattlesnake that is ingested). The rattlesnake jerks its body about, while bridging its back upwards, forming an elevated coil which faces the kingsnake. The elevated coil is used to strike the attacker, and is also used to shield the head from the kingsnake.

Human beings also affect rattlesnake numbers through destruction of their habitat and asinine “roundups” conducted by Texan service clubs. Once when I was a teen, I witnessed another kid kill a rattlesnake. He shot it several times with a BB gun and then clubbed the hapless viper, cheering himself on as the snake tried to get away. My soon to be ex-friend’s rationale was that he wanted the skin, but by the time he finished mauling it that wasn’t worth much. I have ever afterwards been against killing rattlesnakes especially after hearing of their important role in keeping the local rodent population in check. Eradicating the snakes would be like the experiment at the Grand Canyon where they shot all the mountain lions: soon the prey animal would breed beyond reason. In the case of the deer, it meant that the population that the rangers were trying to protect starved itself. In the case of the rodents, rats would soon overrun neighborhoods like mine on the fringes of the city. Rats carry plague. Enough said.

Most people get bitten by rattlesnakes because they are careless. They walk barefooted in the wilderness or its edges. They drown out nature sounds with their ipods and Walkmen while walking straight into a snake. The worst of the lot tease the snakes and the snakes respond forcefully. The moral here is to wear proper shoes, don’t drown out the world with your tunes, watch where you are putting your feet, and leave the snakes alone. If you need to move a snake try stomping your feet first. If that doesn’t work, flick some pebbles at it or — if it is small — prod it with a long long stick. If you find one in your garden, bring your pets inside and call animal control. They will remove the snake and release it in a wild area.

As we seep over the edges of our urban environment, we are wont to encounter creatures that act to protect themselves. I once knew a fellow who kept rattlesnakes for the purpose of breeding them and releasing their offspring back into the wild. Though I declined his invitation to come meet and handle his pets, I still felt he was doing good work. We are the agent of extinction on this planet, a domestic abuser in polygamous relationship with a number of species. Before we destroy, let us see the whole truth of the matter and focus on our interactions. The buzz of a rattlesnake is a warning. We should acknowledge his consideration for alerting us and leave him be. 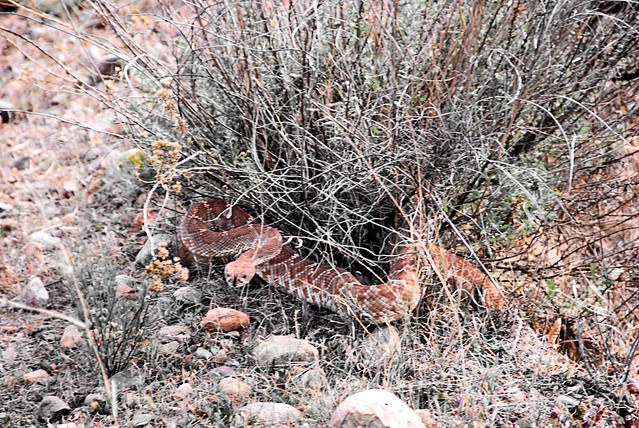 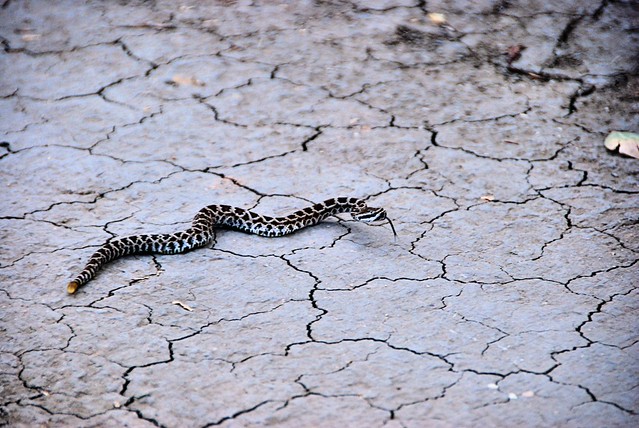 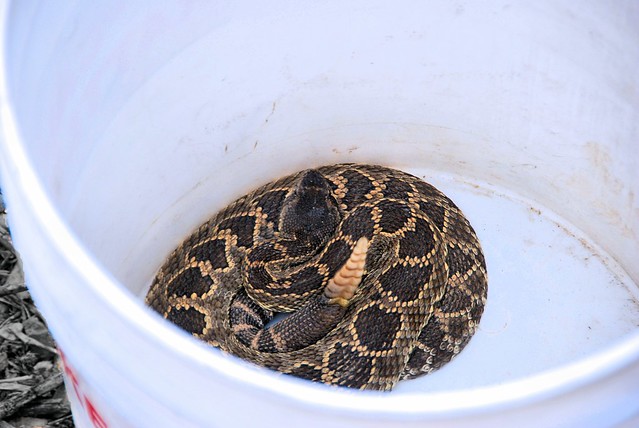 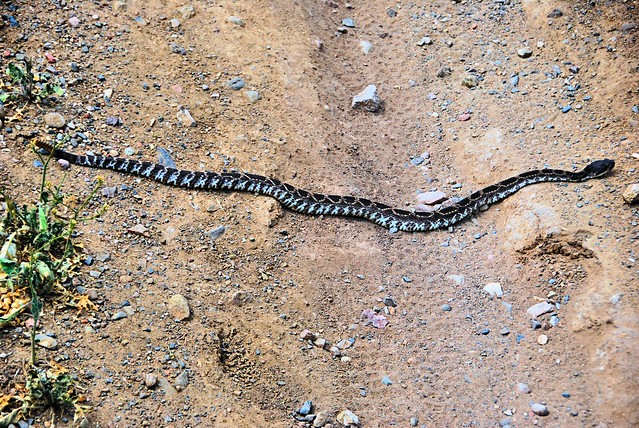