We ambled towards the actual meeting point, noting trail features such as poison oak and a red racer or coachwhip that immediately slithered into a deep hole at the base of a Mexican Elderberry bush. They offered me a ride back to my truck, but I decided that because I had come this far on my own two feet, I could go back the same way. And I did.

I declined an invitation to go to a wine party posing as a hiking outing that evening so I could set up some speakers for our desktop, but I registered for a short loop around the east side of Whiting Ranch that set out at 9 a.m. the next morning. The organizers again picked a free starting point, the parking lot in front of the local Wahoo’s (this is Southern California where fish tacos are a sacred obligation for many). I was even cheaper than them, so I saved gas by crossing Whiting on foot to meet the group as they passed under the Portola Parkway Bridge.

The front woman for the group raced along the trails leaving me breathless and in a sweat. More than a few times I corrected her navigation and persuaded her to stop until the rest of the group –including the host who was shepherding the slower members of the group — caught up. My shirt was wringing wet with sweat by the time we reached the Santiago Ranch Road. A picture of me shows an Ichabod Crane of a man who looks as if he has been swimming in a river — quite a feat in this drought-stricken state. 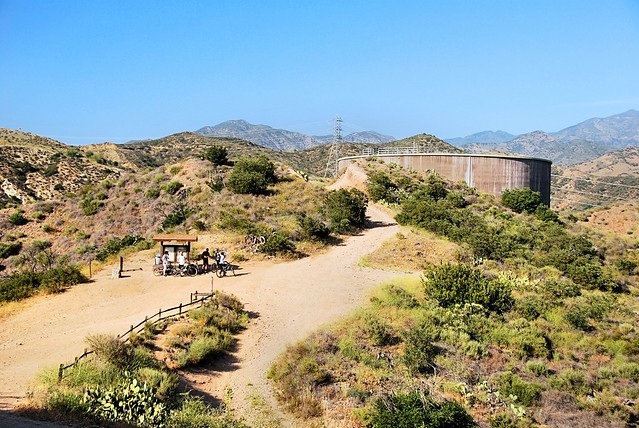 The shower that I got to take after I broke off with the group to climb the Concourse Road allowed me to rinse off the sweat and change into a different shirt, a different pair of shorts, and different underwear in preparation for the next meetup which met at the Dana Point Marina. I did not know what to expect, but soon discovered that when the organizer said “picnic” he meant “potluck” and all I had was a sandwich. So after marching around the sidewalks lining the Marina with various people including the local gentry, I sneaked off to my car and ate my wrap and an orange in my own company before heading home.

I will do this again, if only to bask in a little camaraderie for a few hours on a Saturday morning when I like to hike and Lynn likes to go for her weekly swim. If you want to do the same in Orange County, here is the link: