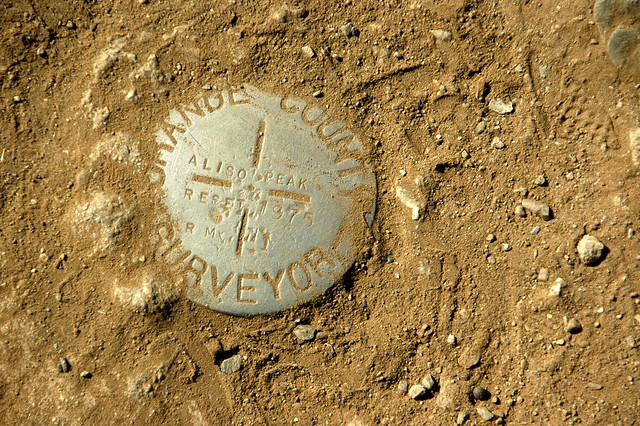 Lynn and I decided we needed a short hike after our storming of Black Star Canyon the day before, so we headed down to Laguna Niguel and parked the car at Seaview Park for the downhill walk to Aliso Peak.

Yes, you read that right.

Lynn asked me a second time if I was sure about what the guidebook had said.

Our starting point was a ritzy neighborhood atop what I later learned was Valido Peak, an unsung promontory crowned with expensive condos and mini-mansions. First we walked across Seaview Park, mostly ignoring the plaques mistakenly identifying every other lemonade berry bush as a different kind of plant (My favorite was the California hibiscus, of which there was no trace.) A railed overlook of Wood Canyon and the sea marked the beginning of the Seaview Trail. Like many steep trails in the area, round stones filled the middle and dust blanketed the sides where people stepped to avoid the stones. I kept to the dust while Lynn slowly but surely negotiated her way using her hiking poles behind me.

From halfway down we could see our destination rising above Laguna Beach and a golf course tucked into Aliso Canyon. The trail kept declining until it met the Valido, Toovet ( the Juaneño or Acjachemen word for “brush rabbit”) and Aliso Summit trails. We took the last of these to the top of the headland. When we got to a final set of railroad tie stairs, I avoided them and clamored up a rocky alternate route.

The view? Houses flooded every inch of the narrow coastal plain and washed up the sides of the headland until they reached the Wilderness boundary about halfway. The late afternoon sun and haze prevented us from seeing Catalina or San Clemente Islands or from seeing very far up the coast. Another ridge blocked the view to the south. Lynn sat at the bench while I examined the plants on the hilltop. I found one among the lemonade berry, laurel sumac, and sagebrush that was new to me. The main distinguishing feature were its waxen, bright red berries.

Another pair of hikers — a man and a woman — joined us. I saw him examining the plants closely and asked him if he knew what my mystery plant was. He pulled a stem closer to his eyes and cocked his head. “I work for a nursery where we have some native plants,” he said. “It’s not coffee berry or lemonade berry. Coffee berry comes in clumps. It’s common around here, but it is the wrong season. I think it is a Ribes species.”

I confirmed the spelling and wrote it down in my notebook.

We went down the same way we came except this time I took the stairs. These were much too high for my comfort. I asked Lynn not to follow closely upon me. Every step I took dangled in the air for a catastrophically long second before coming down hard on the next railroad tie. I skipped the last step because it was the highest of all — nearly twice as high as the others — fighting an urge to break into a run as panic infected my calves. The torture ended as the slope eased into the flat ground where the trails met.

The late afternoon allowed us enough light to explore the Toovet or “Brush Rabbit” Trail that winds around the side and the sea front of the little mountain. The peak appears to consist of the gray rock of the Niguel Formation which I had only learned about the day before when I read about it on the Irvine Valley College Geologic History of Orange County page. Lemonade Berry thrived in this soil along with several chaparral plants that I didn’t know from my upcountry nature rambles. The ocean yellowed as the sun approached the horizon. We took a long look and then turned back for the return to Seaview Park.

I reread the nature plaques on the way back. One of them — in front of yet another Lemonade Berry bush — spoke of a “Redberry” or “Rhamnus Ilicifolia“. I wrote the name down next to the Ribes annotation and looked them both up when I got home. Rhamnus won over Ribes. 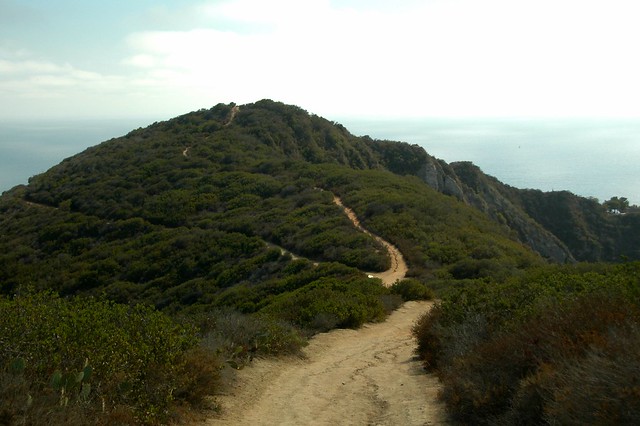 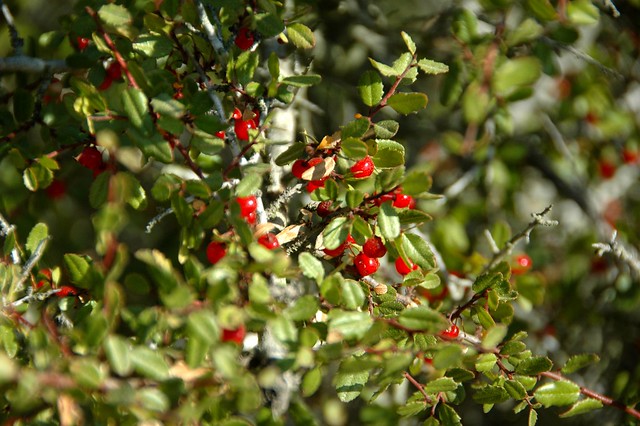 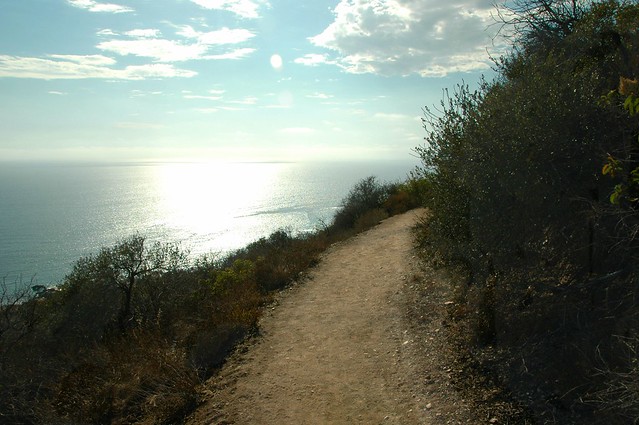 DIRECTIONS: From Interstate 5, get off at Crown Valley and head west (towards Costco — if you see the Shops at Mission Viejo you’ve gone the wrong direction) on Crown Valley Parkway. Crown Valley will bend southwards. Turn right on Pacific Island Drive. At Talaverde Drive (your third left), turn left. Seaview Park is on the right. Park close to the trailhead at the top of the hill.

2 thoughts on “Going Down to Aliso Peak”