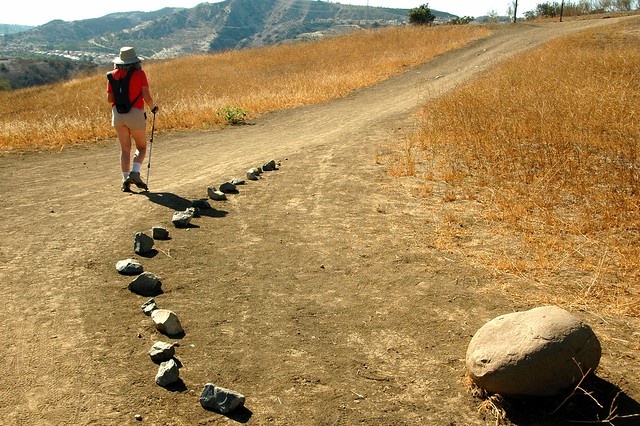 We’d never been to Santiago Oaks Regional Park even though we’d lived only half an hour away, so we laded ourselves with plenty of water and drove down Santiago Canyon Road to find it. After nearly missing the turn, we followed a confusing set of bends through a wealthy neighborhood that brought us to the main gate and the parking lot.

Eucalyptuses dominated the forest. Pines and a couple of exotics that I did not recognize filled much of the space. Laurels and sycamores thronged the wash. Oaks seemed scarce aside from a few oft-photographed trees along the Santiago Creek Trail and a few youngsters planted as part of a restoration project.

We sought out the Historic Dam first. A couple stood by the dark green waters doing nothing when we came, nothing when we left, and nothing when we peered down on them from an overlook. No fish swam in the reservoir and nothing came to drink but still these two stared as if the Lady of the Lake would rise from its waters. The pond itself offered little to recommend itself other than the wall of the century old structure. I marked an anticline in the conglomerate before moving up a cobbled path to the Santiago Creek Trail.

This took us past a couple of black plastic troughs providing water for horses and a nursery for mosquitoes. The forest edge opened to reveal the massive Villa Park Dam. We climbed the Mountain Goat Trail into a summer’s desert. The scrub oak and lemonade berry bushes were the only green other than cactus on the bleak slopes. I kept checking the latter for their sticky fruit but there were none. No yellow grass balds colored the hills. The bush mallow withered and prepared to die. Stray stalks of mustard and trampled dead gray grass were the only reminders of a spring that the land had forgotten.

A fenced-off overlook at the top of the Mountain Goat gave us a place to pause and look through haze to Catalina Island and the Palos Verdes Peninsula. Villa Park Reservoir seemed more of a swamp than a lake in this season of drought. The sun beat down but a pleasant breeze that tickled the tops of the trees below us offset the heat by a few degrees. We turned away from the view and sought out the top of the Cactus Canyon Trail.

A large canine had passed this way earlier. The fine dust — pulverized by hundreds of feet, hooves, and rubber wheels — disguised the prints in places so I thought I might be looking at the spoor of a mountain lion. Coyote was my second guess, but I later learned that this back country was open to dogs: I concluded that a German Shepherd had left the tracks.

A vulture swooped low over us and then went about its business.

Down one canyon slope and up a red clay switchback we padded. I have seen few places as crisscrossed by trails as this. The map showed a maze that was tricky to navigate with names like the Chute and the Coachwhip which delighted me. I avoided them today for the Bumblebee which took us to the top of a ridge where we saw the first engaging natural landmarks in the park: boulders that bubbled out of the hillside. I tried to make sense of the geology, but Santiago Oaks is not neatly stratified like the Grand Canyon. One long wall of stone cresting a hill about a mile away interested me: I resolved to check it more closely on a cooler, greener day.

We chose the Oak Trail as our route back down to the flood plain. The rock formations, though few, were round in places and sharp in others. I stopped to photograph them from the bends in the switchbacks. A man and a woman came up the trail. The man strode confidently, the tube of his Camelbak dangling from his back. The woman — pulled by a scruffy white poodle — struggled and sweat furiously while clinging to a plastic water bottle. Bikers began showing up for their late afternoon climb to the Anaheim Hills. The bottom of the slope arrived. We lengthened our walk by zigzagging through the forest trails, discovering a marsh filled with cattails and surface water.

The strange forest was back with us. I saw a few towhees and a few sparrows. We heard an acorn woodpecker crying “Ja-cob! Ja-cob!” Except for the woodpecker, the birds did not care that this was an alien forest. I wondered what they liked it for other than shade and places to perch. Eucalyptus nuts weren’t edible and few insects dined on the fast-growing giants. The unusual woods were the vanguard which stared down the dessication of the hills. It would be hard to remove them.

Then in the middle of this confusing and contradictory collection of native and exotic trees we came upon a figure in white staring through the chaos of trunks, shrubs, and barren earth. The young black woman smiled and excused herself. “It is so peaceful here,” she said. She had the kind of eye you need in this parched land.

Traci Lehman visited Santiago Oaks at a better time of the year. Check her account here. 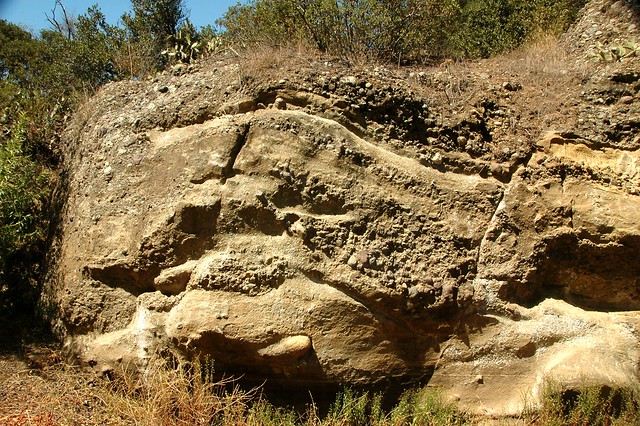 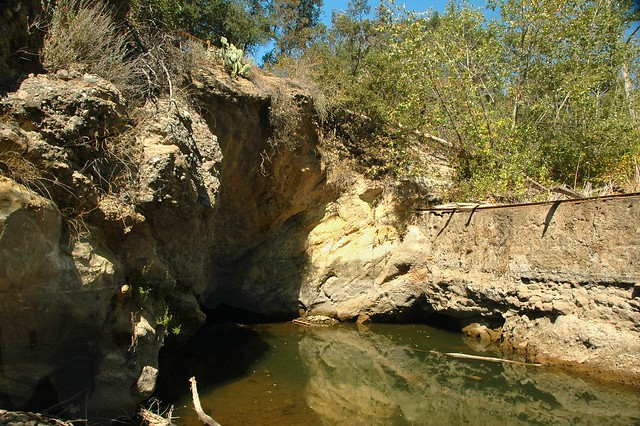 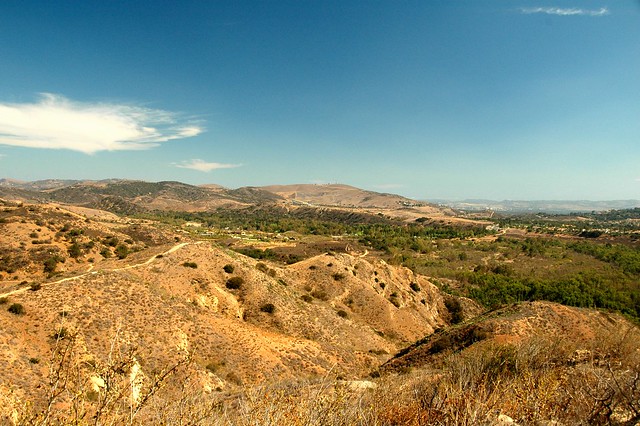 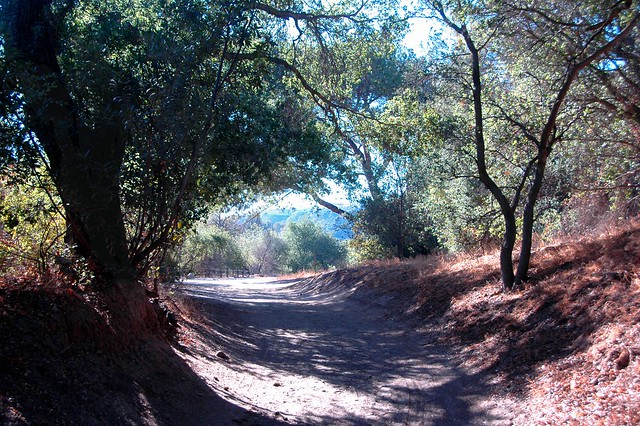 Some of the oaks of Santiago Oaks

2 thoughts on “The Summer Desert of Santiago Oaks”