“They only have little tiny tails,” said Gretchen (of Agua Chinon fame). She held out her fingers maybe an inch and a half wide to show me.

I laughed and did not take offense. Bats were not the main reason for these twilight hikes. We gathered first in Black Star Canyon Wilderness Park on a Saturday night to walk under the full moon. The planetoid did not disappoint us. It leaped out of the east right at the start of our walk. The organizers had asked us to bring only red flashlights so that we would not ruin our night vision. I had carefully wrapped the lenses of our wind-up flashlights in cellophane before we got there, but Lynn had lost hers. The moonlight made up for the deficit, however. Colors faded as the light of the day disappeared, but we could make out forms. Except for crossing a rocky, dry creek, I didn’t use my flashlight. The road was mostly smooth and my feet were certain.

We walked in the dimming light for about two miles. The route would have been unbearable in the daytime, but the lack of shade did not bother us. The docent pointed out interesting geological features, chaparral vegetation, and some runny coyote scat. The single hill wasn’t memorable. We stopped at a road blockade where we photographed the brash moon before going back the same way we came.

Our mission on the second hike was to observe the Perseid meteor shower. 25 people had registered, but only eight made the actual trek.

The start of our walk on the Hicks Haul Trail skirted some rock formations which Michael (also of Agua Chinon fame) told me were of the same Sespe formation as the Sinks farther to the east in Limestone Canyon Wilderness Park. They had no name. I mentioned my interest in seeing them during the day so that I could photograph them. The guides invited me to some regular walks along the same route that took place in the early evening. I gathered that it was an easy walk which let you set your own pace. I studied the scarps as long as the light let me.

The stars and planets came out as we neared the top. I brought out my Google Sky Map, regretting that it did not have the special night mode anymore, and identified Mars and Saturn hanging near one another to the south southwest of our location by its brilliant display. I put it back, but others kept bringing out their cell phones to know the names of the constellations hanging over our bodies. The leaders opened a box which held several yoga mats. We laid these out and stretched our bodies over them to begin the evening star show. Hills blocked the glow of the City of Irvine. The nearly full moon had not yet risen, so we could enjoy the sky above us without fear of diminished vision. The expedition’s leader, Susannah, gave out prizes for the firsts of the evening. Meteors were the main attraction, of course, but a pair of planets, some satellites, and an iridium flare added to the event.

The star show was nothing like what I had seen on Mauna Kea or even in the desert. Haze — which was invisible due to the darkness — obscured some of the stars. Satellites would appear and disappear behind the thin cloud cover. How many meteors we missed because of it I cannot tell you. I saw one shooting star for certain. The meteor jumped out of the star field directly overhead and disappeared in a second, perhaps a grain of space sand that burned up quickly. I may have seen a second closer to the horizon. Lynn counted two for certain and our party counted five — not including my possible.

We dreaded the full moon’s crashing of our gathering, but it did not appear until we were well down the hill. The orb blared its imminent coming over the foothills. We stopped our descent to watch its rise then walked down to the trailhead in its glow. 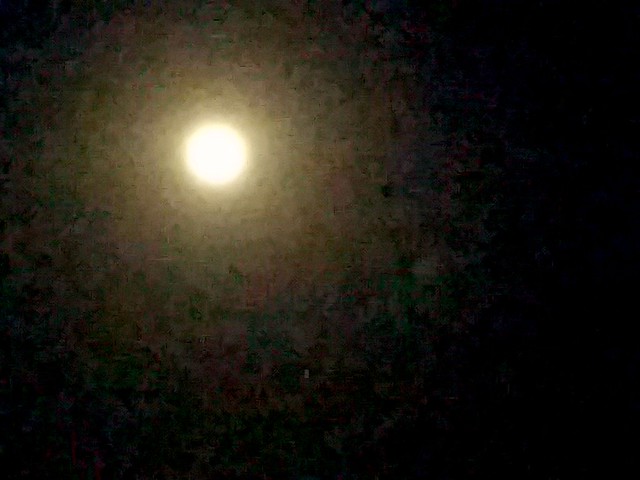 DIRECTIONS: Both these events were put on by the Irvine Ranch Conservancy. To sign up for them or something like them, visit http://www.letsgooutside.org.