Wide fire roads and ranch roads from the days before foothill subdivisions attract trail bikers to the Southern California wilderness margins. Some will dare the narrow single tracks and in some cases local parks authorities allow this. Just witness the Cactus Hill, Sleepy Hollow and Sage Scrub trails in Whiting. Walking should not entail taking your life into your hands, but keen use of all the senses especially sound and sight will keep you bones unbroken and your vitals unsquashed. Most bikers show respect for walkers. There are those, however, who forget themselves as they feel the adrenaline rush of speed and forget that paths in the chaparral are not rides at Disneyland or Knotts Berry Farm.

I was hit by a trail biker on a double-track. I wrote about it in my other blog, Pax Nortona, last December:

A shout and the scream of brakes told me that he was coming in an uncontrolled sloping fall down the trail. I stepped up to the raised dirt siding to avoid him. Alas, he had the same idea. His handlebars punched my lower back. He fell sideways. I took two steps forward and bit down so hard that I cracked a temporary crown. There was no animosity between us afterwards. The day was hot and salved my spine. I walked off the pain and the surprise. 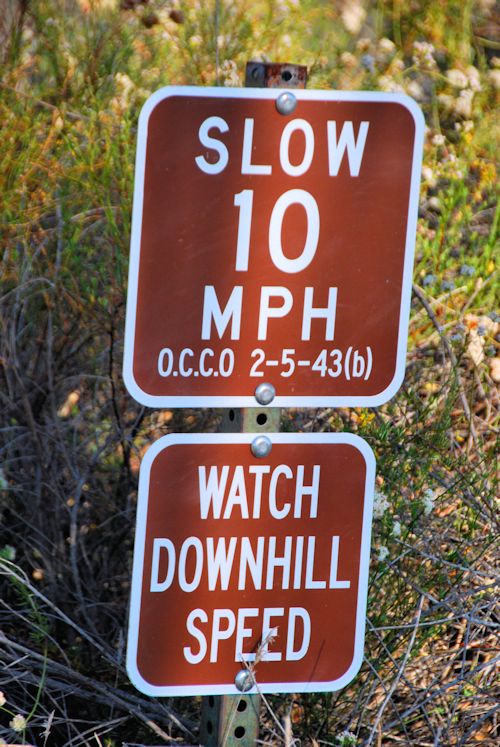