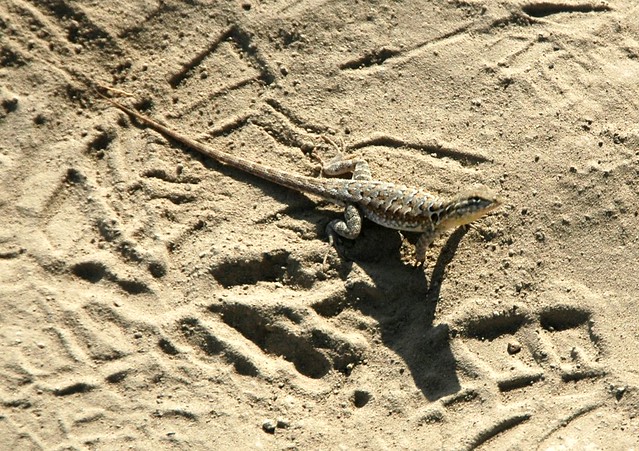 As I set down the trail, the only flowers in bloom seemed to be invasives such as fennel and artichoke thistle. I found a bit of fur in a live oak forest and took a picture of it. The hair was soft and I coveted the rabbit skin that it had come from. What had killed it? Didn’t notice any tracks because it was late in the day and the dust had been thoroughly trampled by mountain bikers, trail runners, and hikers. But there were hoards of tiny black beetles scurrying over the back road’s cracked surface. I cursed that I didn’t have the knowledge to know what they were or at least a lens to examine them.

I heard several bird songs, but I was agnostic as to their nature. A couple of pale lizards crossed my path and I celebrated the fact that I knew that they were Western Fence Lizards, adapted to blend with the creamy dust of the Live Oak Trail. I took pictures. When I got to the Vista Point, I checked the temperature again and marked my new elevation: I had climbed 500 feet. The next thing I did was to scan the weather. Curly cirrus clouds wafted over the foothills. A crystal view of the mountains lay in front of me, but purple smog cloaked the valley beyond the housing developments.

As a future exploration, I noted some red rocks on private land that resembled those in Limestone Canyon and Whiting Ranch, undoubtedly possessing the same history. More pictures.

Then I went home.

The brown journal that I had picked up earlier in the day received my descriptions. I pasted a few photos using double-sided tape. Then I thought about what I could learn next from my activities. The spring had focused my attention on wildflowers. Summer’s mortuary season ended that, so I required a new aim. Would it be beetles or bird song? My cell phone let me record sounds. Would tapes of bird song be very expensive? Beetles would require a field guide, a magnifying glass, forceps, and a plastic specimen box. Birds or beetles? The evenng’s work ended with my looking at pocket weather stations.

I’ve long been the kind of hiker who doesn’t do it to cover great distances, but to see what lies along the trail. The journal enhances that desire with a record of experience.

How to keep your own nature journal.